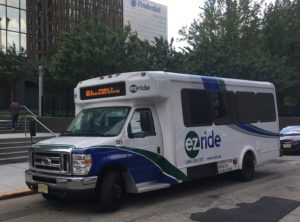 PSEG, headquartered in Newark for over 100 years, is one of the ten largest electric companies in the U.S.  On May 1st PSEG partnered with EZ Ride to launch an employee shuttle service that links their offices to Newark Penn Station and multiple parking garages in Newark.  The shuttle operates daily from 5:30 am – 10 am and from 2:30 pm – 7 pm.  The service uses two buses which run on two different routes – one serving Newark Penn Station and the other stopping at the parking garages utilized by PSEG employees.  “We are pleased to provide this shuttle service for our staff.  Getting to the office, especially in poor weather conditions, is much easier when you know there is a shuttle available every 10-15 minutes from Newark Penn Station or the parking garage. The availability of the EZ Ride shuttle has made the commute a little easier,” said John Hadden, PSEG Manager – HQ Operations.

EZ Ride also administers six vanpools for PSEG employees who commute to Newark from Toms River, Pt. Pleasant, Howell, Plainsboro, Hillsborough and Old Bridge. One of the vanpools has been in operation for more than 27 years.   EZ Ride plans to host commuter events at PSEG to increase awareness about other commute options such as public transit, carpooling and vanpooling as well as safe biking and walking.

For more information about setting up shuttle services at your facility, please contact: