Essex County was using its own fleet of vehicles and a private company to transport residents to a variety of agencies spread all over the county and was challenged by inefficiencies, a flood of rider complaints and issues with vehicle maintenance. Transportation Administrator Michael Vieira set out to find a better way and found it with the EZ Ride shuttle service.

The Essex County Division of Training and Employment runs programs that provide education and training, job placement assistance and other services for county residents. The agency works with the Division of Welfare, and the New Jersey Department of Labor and Workforce Development to provide its clients with essential services and opportunities to enable them to find good-paying jobs.

Challenges Prior to EZ Ride

The Essex County Division of Training and Employment had a challenge; its programs for job training and placement, education and other essential services were spread across a variety of agencies located all throughout the county. The county owned and maintained the vehicle fleet used to transport residents to these agencies, but breakdowns and lengthy repair times were causing service interruptions and complaints.

A private company provided the drivers and managed the shuttle services. The shuttles were vital to county residents who need training and education so they can pursue job opportunities that will enhance their lives. An efficient, well-run transportation system was critical for the Division to meet the needs of its clients and fulfill its mission of helping county residents meet the challenges of the job market.

Transportation Administrator Michael Vieira was frustrated with the status quo: “We really needed to upgrade the way we were transporting our clients if we wanted to maintain the viability of a wide range of essential and popular programs.”

In response to a request for proposals, Michael found EZ Ride. “They came in with a great proposal and had a successful track record running shuttles for other organizations; we realized that Essex County could benefit greatly by forming a partnership with EZ Ride,” he said.

“We strive to provide our clients with the best possible social services to help them live a better life. In many cases, they do not have cars to get to vital programs. Part of our mission is to make sure they get to their appointments on time. Essex County can rely on EZ Ride to achieve that goal.” 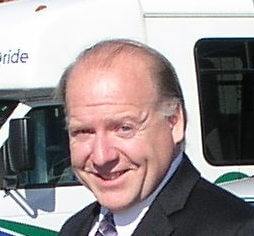 EZ Ride started out by providing drivers and managing the shuttle service, comprised initially of six routes. “They brought a new level of reliability and safety to our shuttle service,” said Michael. “When EZ Ride proposed switching to their EZ Ride shuttle buses, we decided to give it a try.” Over time, EZ Ride consolidated the service from six to four routes and phased in their own vehicles. The results were well-received by riders and management.

“The EZ Ride shuttles have state-of-the-art technology,” said Michael. “This added a new dimension of safety and efficiency to the fleet and improved on-time performance. In addition, using EZ Ride mini-buses relieved the county of having to maintain a fleet of vehicles.”

All the shuttles were equipped with GPS navigation systems and in-vehicle cameras. “The navigation unit allows the dispatcher to monitor the shuttles in real time and generates detailed reports that pinpoint vehicle location and record the speed of the vehicles,” said Michael.

The cameras provide an accurate account of events if a vehicle is involved in an accident. The cameras are triggered by an impact to the mini-bus and record video eight seconds before and four seconds after the event. The videos can be accessed over a network and are reviewed by professionals to help determine the cause of an incident.